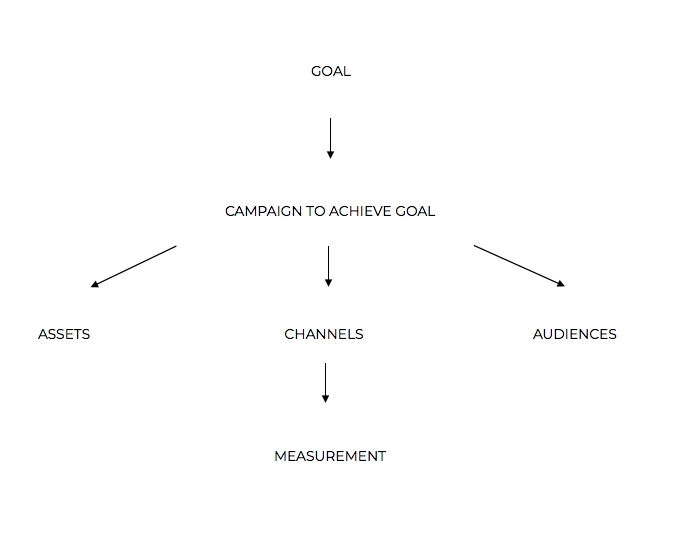 We are asked on a fairly regular basis to create campaigns for different clients – and one thing we’ve noticed is that almost all of them mean something a bit different by the word “campaign.” Mailchimp calls each email a campaign. Google Ads lets you run Campaigns with Ad Groups and Ads. Television calls each 30 second ad a campaign unless it’s part of a larger set which then means…they’re all one campaign? Maybe?

Let’s break through the noise and once and for all get on the same page – maybe then the rest of the world can join us?

A marketing campaign has 5 parts. That’s it. Simple right? Simple, yes. Easy, not so much.

PART I: Set a goal

A goal in digital marketing needs to have actual dollars attached. Unlike traditional marketing where the numbers are vague (who knows how many listeners actually listened to your ad on the radio rather than turning it down to argue with their kids, for example) and should be attached to a Call to Action (CTA) that has a real return on investment (ROI). A vague goal here just won’t do. Many clients come to me asking for “increased brand awareness” as a goal. What does that mean? More traffic? More followers? More people stopping you in the grocery store to let you know they love your newest podcast? How will it be measured? In short – if I could wave a magic wand at the end of the campaign and give you exactly the results you will be happy with, what specifically does that look like?

Channels, platforms, methods of delivery – all the same thing. Decide where your ad will happen. This should be informed by the other two parts of the campaign design (audience and assets) but it needs to be chosen first. Are you creating a marketing campaign to be deployed on Facebook? Insta? LinkedIn? YouTube? All of the above? Will you be hitting different audiences across a range of channels? Will each channel have different ROI markers to measure? (Don’t panic! Any marketer worth their salt will guide you through these decisions with gentle probing and creative questions.)

You’ll need words and pictures (or video) to get your message across, and they should work together to be greater than the sum of their parts. This part is FUN. Seriously.

Although this is labelled as part four, your audiences need to be defined at the same time as you are choosing channels and creating assets – since the audience you’re talking to will determine the best options. If you’ve been to any Kickass Company or HALA events, you know that having three distinct audiences (your Money Avatar, Soul Avatar, and You-vatar) is necessary for a well rounded, successful business and that every campaign should be directed at whichever of those audiences you need to add more of at any given time. Your Money Avatar won’t respond to the same messaging as your Soul Avatar because not only do they usually have different demographics, but they also have different needs, pain points, and triggers. Those will determine the assets, and where each avatar hangs out will determine their most effective channels. Creating one campaign with three sets of assets to be deployed across three different channels is absolutely normal, measurable, and effective.

Once your campaign is at the halfway mark in terms of days (or you’re halfway through your budget, whichever comes first) it’s time to make sure they’re working, and make adjustments if they’re not. We recommend running campaigns for weeks at a time instead of days or months when you’re starting out. Too short and you will not have a proper grasp of the numbers, too long and you’ll have spent too much on what doesn’t work. Finding your sweet spot has a lot to do with your comfort level and immediate success. Checking in halfway will keep you from excess and waste, but that doesn’t mean you don’t measure again at the end. Measurement is key to making sure that your money is well spent and your return is solid, no matter that your goal is.

After the campaign is over, it’s time to evaluate every step of the process, from the goal setting to the deployment to see what worked (and do more of that) and what didn’t.

Good luck – and drop us a message when you have an ad running so we can check out your awesome!